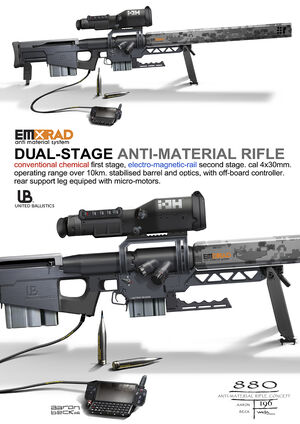 The SRS-72M1AI is a Anti-Infantry sniper rifle that utilizes anti-material munitions capable of drilling straight through six inches of steel. Developed in conjunction with EMXRAD branch of United Ballistics (UB), the rifle's intended purpose was combat rather than security. It is considered a "bunker buster" rifle with it's ability of drilling through concrete and steel and other hard materials with a munition of bursting within the bunker.

Utilizing a bolt-action feed mechanism, the anti-material rifle can be deployed without the user ever having control over the weapon itself but can be operated digitally over a wrist mounted computer or a tablet. This is primarily used when the operator of the weapon is using the much heavier depleted uranium 4×30 mm round, because of the high recoil and kick when fired, if the operator used it manually, there would be a eighty percent chance that the kick would result in a broken shoulder.

Despite two stages of firing, the first stage which is conventional would be the result of the kick, the second stage of the electro-magnetic-rails allows for the bullet to cover a lot more ground than through conventional barreling.

Most often though, the rifle is used for anti-infantry purpose as it was designed for with operator's actually having manual control over the weapon. The rifle can be commonly but rarely used by trained operator's on Pandora. Curiously, it has never seen action against the Na'vi and by the Pandoran Accords, it is prohibited in use outside the wire.

Retrieved from "https://avatarinitium.fandom.com/wiki/SRS-72M1AI?oldid=5260"
Community content is available under CC-BY-SA unless otherwise noted.