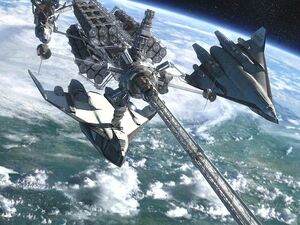 The Valkyrie SSTO (Single Stage-to-Orbit) TAV-37 B-class shuttlecraft (Na'vi: shah-tell) is a delta-wing transatmospheric vehicle primarily used to transport equipment, raw materials such as unobtanium, and personnel between the ISV and Hell's Gate on the moon Pandora. Valkyries have an operational range of 2000 kilometers in the Pandoran atmosphere. The Valkyrie has a payload of up to 60 armed troops, 25 AMP suits, 25 tons of refined unobtanium and/or supplies.

The two Valkyries carried by the ISV are used to transfer personnel and cargo between the orbiting ISV and the surface of Pandora. These vessels are left at Pandora, and the old Valkyrie craft are re-purposed to serve as automated gas harvesters, skimming through Polyphemus' upper atmosphere to obtain anti-hydrogen and deuterium for refueling the ISV. Each has VTOL capabilities by pivoting the engines for landing on the planet, and the Valkyrie's powerful fusion power plant provides enough energy to the engines for hours at a time, which allows the shuttle to function as a low speed aerial platform for exploration and survey roles.

VTOL aircrafts have known to exist even in the 20th century, having been created in response to creating more space aboard aircraft carriers and airports. It was only in the mid 21st century did the Northrop Grumman aerospace and defense corporation began constructing a vehicle to exit the Earth's atmosphere and return without the necessary chemical propellants as seen on rockets. Thus began the research to the predecessor to the Valkyrie, codenamed Sparrow.

The Sparrow proved to be a one billion dollar project that began to go over budget by 2036, fearing possible cancellation and a lost of finance from investors, Northrop moved to find military contractors rather than private industry companies who were currently exploring mining the Moon and asteroids. Several European nations were interested as well as the Canadian and United States goverment. Much of the money that came from these governments managed to fuel the need to continue research in fusion reactors to propel the vehicle and break out of Earth's gravity.

The first planned flight session was held on March 17th, 2038 in Nova Scotia. The flight proved most successful with the vehicle capable with docking the International Space Station and returning with the pilots not wearing any protective atmospheric suits. With the success of the Sparrow, military contracts were in order and eventually a fleet of nine Sparrow class vehicles were constructed.

When Northrop closed their doors in 2078 due to financial lost, the updated version of the Sparrow was handed over to conglomorate aerospace division of Boeing. They immediately began constructing a vehicle that was capable of space and atmospheric flight beyond Earth's atmosphere without a need for being close to a space station. Research and development began on X-77S Talon in 2079. The first prototype was completed in 2080 and flight trials later that year.

The first flight between Earth and the Moon began in 2081 with an updated and modified version of Northrop's version of the fusion reactor. This allowed the vehicle to traverse between the Earth and Moon in thirteen hours rather than three days it normally took for conventional vehicles at the time. The unique development that cancelled on-board g-force was specifically designed for the Talon in order to use the full potential of the fusion reactor. Information surrounding how this was possible has been kept private even to this day.

Valkyries enter the dense Pandoran atmosphere after decoupling from an ISV from a low delta-v orbit. As it hits the Pandoran atmosphere, the hypersonic re-entry speed generates frictional heating. Carbon fiber thermal tiling on its ventral surface protects the Valkyrie during the descent. As it decelerates in the upper atmosphere, it vectors towards its only landing site, Hell's Gate. At 10,000 feet of altitude, where the atmosphere is thick enough, the air-breathing turbojet engines are activated. They provide forward propulsion until the shuttle is on the final approach to Hell's Gate, which is when the mining pit is spotted. At that point the engines are transitioned to VTOL mode, which slows the shuttle,and allows for better maneuverability. As the shuttle approaches landing, it hovers on thrust from the four-poster lift engines, then settles to the ground as thrust is throttled back.

In order to reach orbit, the shuttle rises in hover and the engines are vectored slightly aft to begin forward acceleration. The shuttle then transitions to wing-borne forward flight at 130 knots, with the engines now aligned longitudinally for forward thrust. It then accelerates to supersonic speed on the turbojet engines. As it approaches Mach 3, hypersonic inlets open and the Valkyrie goes into scram-jet mode. It steadily accelerates at 3G's to Mach 7, and then transitions from turbojet to the fusion orbital engine for the final burn to orbit. Valkyrie Destroyed

The Valkyrie is destroyed.A Valkyrie was fitted with machine-gun nests on the wings and cargo ramp and was going to be used to deliver two Daisy Cutter explosive packages to the Tree of Souls. It was destroyed when Jake Sully, in his avatar, threw grenades into the engine intake after the explosives had been armed, causing the Valkyrie to tip forward and the explosives packages to fall back inside the hold. The explosives then detonated while still inside the Valkyrie, causing the entire ship to disintegrate in a massive fireball. The second Valkyrie was seen being used to ferry many of the remaining base personnel of Hell's Gate back to orbit, leaving their equipment behind.

The Valkyrie is roughly four times the size of the twentieth-century Earth shuttles. Because it uses fusion engines, the Valkyrie can redirect its containment fields for active EMF damping, so it can function very well in the high magnetic field areas of Pandora. It does not rely solely on passive shielding. The Valkryie cargo bay can hold troops, AMP suits, all necessary ammo and gear, plus larger payloads such as specialized electronics and lab equipment that cannot be manufactured on Pandora. The inside of the bay looks much like any terrestrial cargo airplane, with netting to secure payloads to the walls, rollers built into the floor to facilitate unloading, lock bars for the AMP suits, and seats for RDA security forces. But its most important mission is the transportation of refined unobtanium from the surface of Pandora back to the orbiting ISV. Without this capability, there would be little or no human presence on Pandora. It is also the only possible ride back to the mother ship, and thus the one link with the long journey back to Earth.

The Valkyrie rides on a plume from its dual-mode fusion engine so powerful that it is visible at night from Hell’s Gate almost all the way to orbit (though it disappears over the horizon before orbital velocity is reached). Though it reaches orbit in less than ten minutes, the Valkyrie requires an additional six hours to maneuver to rendezvous and hard-dock with the ISV.  Despite its size, the Valkyrie's mass is relatively small due to a fuselage fashioned from extremely strong non-metallic composite material. The material has high tensile strength, but only one quarter of the weight of the permalloys used in previous shuttles. The superstructure uses carbon nanotube composite in key locations to maximize stability and help conserve fuel.  The two exhaust nozzles of the orbital engines face aft, and the engine nacelles are heavily shielded from the cargo bay. The least radioactive sections of the reactor directly parallel the bay. There is a rear ramp that lowers for the unloading of large vehicles and AMP suits.  There are fold-down stools with passive restraints for the individual passengers which line both long walls of the bay. The AMP suit racks are located in the middle of the cargo bay in a double row. The cargo bay is a double deck design which allows the ISV cargo modules to be stacked two-high inside the bay. Cargo modules are transferred from the shuttle to the ISV by a large robotic arm which travels along the longitudinal spine of the starship on a mobile transporter base.

Retrieved from "https://avatarinitium.fandom.com/wiki/Valkyrie?oldid=5013"
Community content is available under CC-BY-SA unless otherwise noted.